We slept in this morning again and left the camper around 11am.  YNP roads are set up as a large figure 8 known as the Grand Loop with the 5 entrances jutting off of the 8.  Today, we are going to do the top part known as the Upper Loop.  We drove north and herds of bison could be seen trying to wallow in the 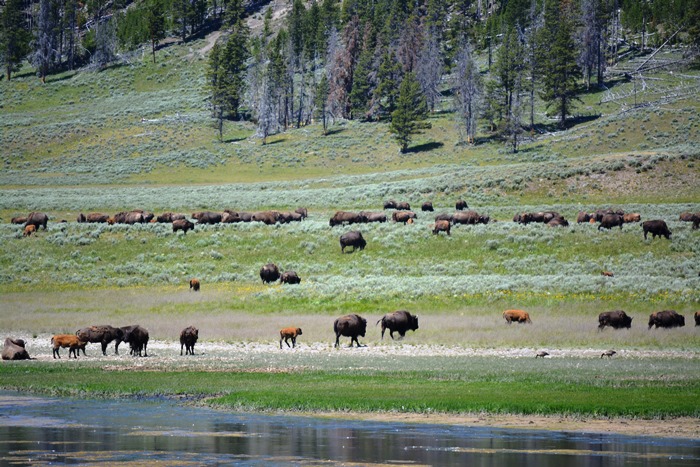 dirt to keep cool in the midday sun.  We entered Canyon Village and drove the South Rim Drive out to Artist Point.  Here after a short walk we had a beautiful view of the Yellowstone River and the 308′ Lower Falls and the Grand Canyon of Yellowstone.  After a quick lunch at 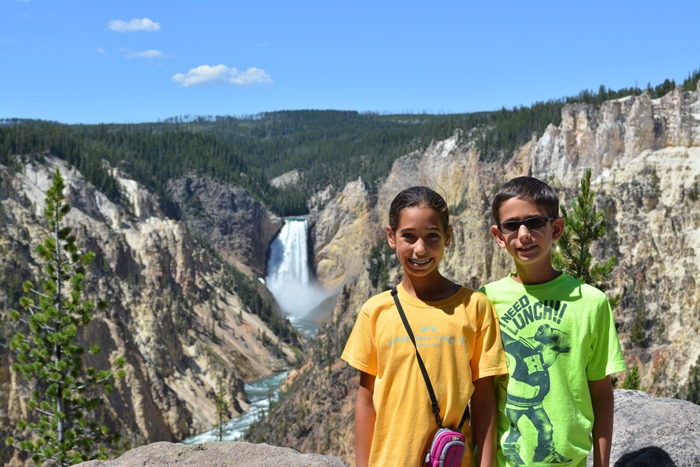 Canyon Village, we headed west towards the Norris area.  There is a fire exhibit off the road.  YNP had a massive fire in 1988 that left much of its landscape scarred- however much of the landscape is slowly returning.  Almost 800,000 of YNP’s 2.1 million acres were touched by fire that summer which was finally extinguished by October snowfall!  We headed into Norris Geyser Basin and did the shorter Porcelain basin trail around a loop to see the different hot features.  Many of the hot feature walks are done on boardwalks or paths which V&T desperately want to get off of.  We left and headed North and just before getting to the aptly named Grizzly Lake, we saw a lone grizzly bear up relatively close.  It came into a clearing about 100 yards away 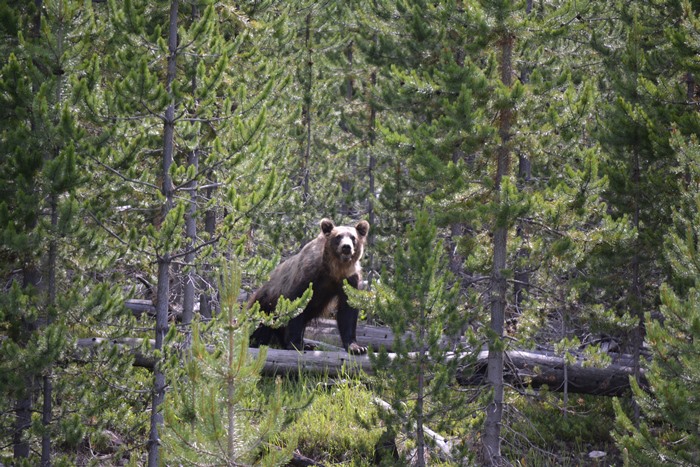 and put its front paws up on a log and stared right at us- it was exciting!  We continued on and crossed the Golden Gate Bridge (YNP style), and then found a small unnamed turnout that had great rocks for climbing-  T&V had a great time and G just tried to keep up.  We continued north to Mammoth Hot Springs area and did a drive through the Upper Terrace area.  The US Army came to YNP in the late 1800’s and used the Mammoth area as their base.  As we went through Mammoth’s downtown area, we saw about 25 elk right in the downtown square!  We headed east and made a quick stop at Undine Falls- a double waterfall with a drop of more than 100′.  Our whole family had really enjoyed the one way dirt road in RMNP, so we decided to try the 6 mile one way dirt road called Blacktail Deer Drive- unfortunately we saw no wildlife on the road and now likely need to have the car’s front end aligned.  :)  We stopped for a quick look at the Petrified Tree- but it did not look scared to any of us.  As we reached the Tower Roosevelt area, we stopped at the old Roosevelt Lodge for a nice dinner.  We made a quick stop at Tower Fall to the see the 132′ waterfall as it pours into Yellowstone River.  We found cell phone service and pulled off to make calls when a coyote just walked by across the road.  We continued south and passed Mt Washburn, the highest point in YNP.  We then re-entered the wildlife rich Hayden Valley at an ideal time before dark.  We saw numerous elk and got in our first “bison-jam” with 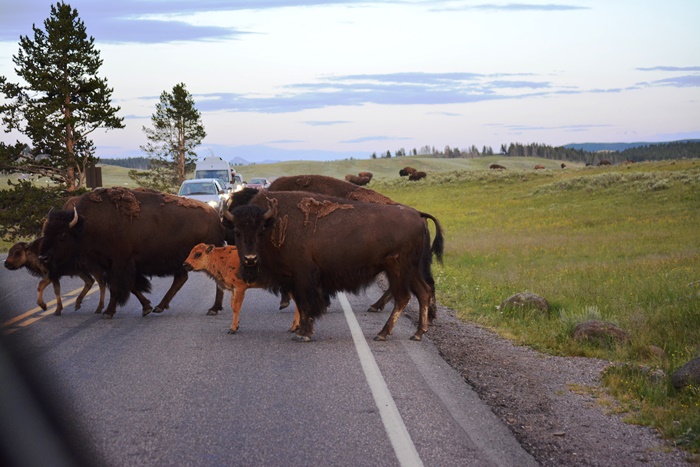 our car being the lead one with perfect views of the bison as they were on both sides (and middle!) of the road.  Continuing south, we just missed a small pack of wolves unsuccessfully chasing an elk.  The highlight was the distant pictures of the wolves and listening to them howl- probably the one thing that made us most feel like we are in true wilderness.  After a quick stop at Mud Volcano area, we headed home.  Today had made all of us converts-  YNP was now our unanimous favorite!