Going to the Sun and O Canada!

Today was to be our most ambitious driving/touring day in the car- nearly 265 miles through the mountains of the US and Cananda!  We headed out early from the KOA campground in West Glacier and entered Glacier Nat Park (GNP).  GNP had 150 named glaciers in 1850 but only 26 remain today- they are

In front of Bird Woman Falls and the hanging valley created by a glacier that is gone.

forecasting that all will be gone by 2030.  After a short construction delay we were on our way on GNP’s Going to the Sun road- an engineering marvel of a road completed in 1932 that stretches 53 miles.  I will save the suspense and say that this was the most magnificent of all the roads we have traveled so far this trip!  The road is only open for about 4 months per year and can be closed to as late as early July due to snow.  At its top, Logan Pass can be covered under 80 feet of snow!  It takes the

Parks service snow plows months to get the road clear.  The road starts out rather flat on the south side and passes the clear Lake McDonald as it begins to gradually climb with Heavens Peak in the background.  We could see the 560 foot Bird Woman Falls off in the distance with a remnant glacier above it.  Right after that was a spectacular site- Haystack Creek, which from the distance looks like a falls coming right down through the road.  Later we saw the Weeping Wall, a natural waterfall that seems to seep right out of

the mountain onto the road!  Right before the summit at Logan Pass, we stopped at Oberlin Bend 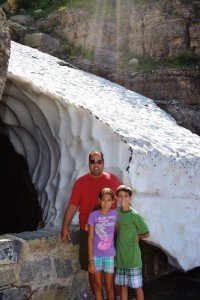 Overlook and saw several Mountain Goats which the kids liked.  Beginning our downward journey, we stopped at Siyeh Bend and took a short hike with Blackfoot Glacier visible in the distance.  We had a trailside bag lunch at Sunrift Gorge under the road overpass and V&T played on the rocks.  We continued down and arrived at St Mary Lake- the end of the G to S  road.  Our plan from there was to exit GNP and make 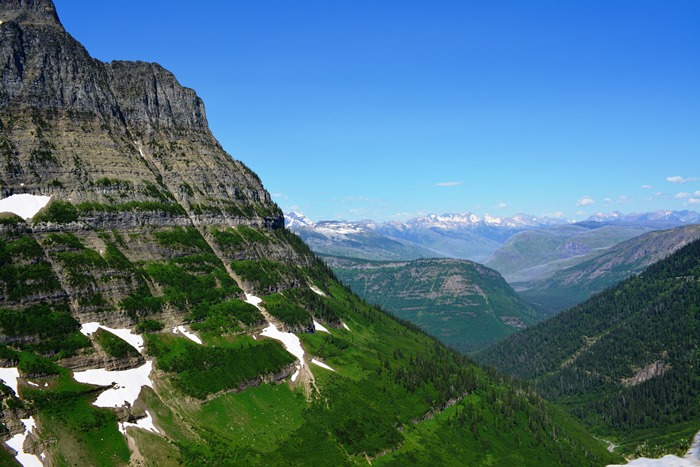 our way north to Canada’s Waterton National Park.  The drive was more great scenery and the kids (especially T) were excited to be leaving the country for the first time in their lives- you can imagine their faces when we crossed the border and it looked the same as the USA! The border crossing was quick and easy.  We had been told to try the Red Rocks Parkway(self descriptive name) and were glad we did- we saw a young black bear and fleeing glimpse of a grizzly later.  We entered the quaint town of Waterton and took a short drive around- very nice with restaurants and small beaches.  We stopped at the historic Prince of Wales Hotel(built in 1927 by the railway) and walked down to the cliffs overlooking the Lake.  The wind 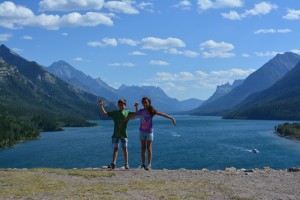 The windy cliff at The Prince of Wales Hotel in Canada.

comes through howling night and day off of Waterton Lake and seems to pick up steam as it reaches the stop where you stand near the cliff.  The kids thought it was great!  We took a quick tour of the hotel lobby and sat for a while listening to a lady play the harp- how refined of us:), G even considered singing O Canada A capella for the guests in the lobby but his family thought otherwise .  We had a nice early dinner at the restaurant on site and all sat with our elbows off the table at L request.  We then began our trip back to the good ole USA.  We had considered staying overnight at the hotel (L had even brought everyone a change of clothes!) but decided otherwise when they informed us that the available room that night would run us $799.  V thought it was quite cheap-  $7.99 for a hotel room until we informed her!  We made a wrong turn and headed into the Canada hinterlands instead of the border- 30 minute mistake- oops.  We got back into the USA and decided to drive the Many Glaciers road out and back. By 9pm, we were back at St Marys ready to go over the Going to the Sun road again.  The great thing about being this high is that it does not get dark till 10:30!  We went back down the 53 mile road- this time with almost no other cars around us.  The views of the mountains and the other features near sunset were fantastic.  We finally arrived back at the RV at almost 11 pm- what a day! 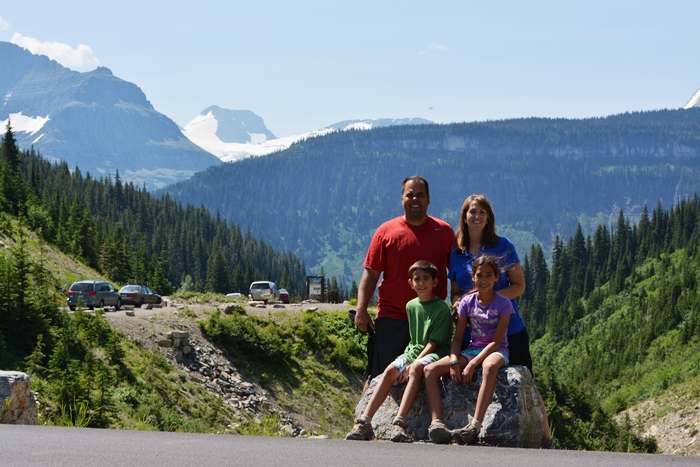 At Siyeh Bend with Blackfoot Glacier in background