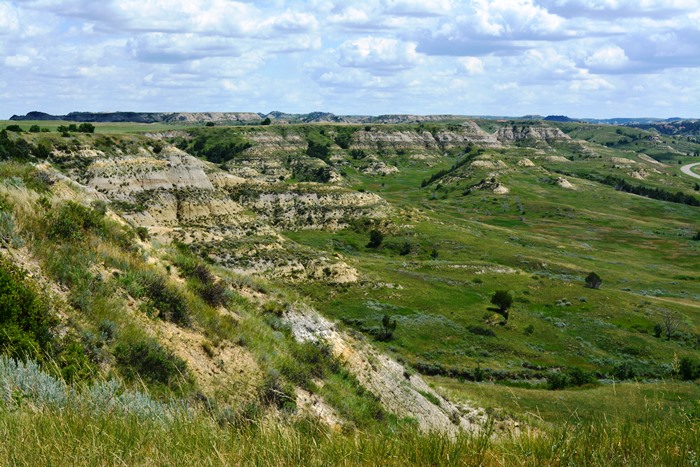 Looking down in TRNP

We headed over to TRNP late morning and it was quite a bit different than the other national parks we have been to.  Much less crowded.  We are at the South Unit of TRNP.  There is a North Unit, South Unit, and the Elkhorn Ranch (that Roosevelt once owned) that constitutes the TRN Park.  The North Unit was too far away and Elkhorn Ranch was unpaved so we decided to stick to the South Unit.  When we got to the Visitors Center we watched a quick 17 minute video about TR and TRNP- quite interesting.  TR came to the Dakotas in 1883 for time away from New York after his wife (giving birth) and his mother died on the same day in 1883.  He was here only 3

Checking out the amazing views

years till 1886 before heading off to fight in war and get involved in politics, but the Badlands made a huge impact on him and he was the driving cause behind our nation’s national parks and monuments.  The park is very rustic with almost no amenities so we decided to head back into Medora (a 5 minute drive) for a quick lunch before setting out.  When we got back, we set off on the 36 mile scenic loop drive.  We encountered our first “prairie dog town” and stopped at the Skyline Vista for a quick walk-  G,V, & T had a foot race back up and one guess who came in last. :)  We continued on and hiked the .6 mile Ridgeline Trail- the views were beautiful and we were all struck by how dry the area is. 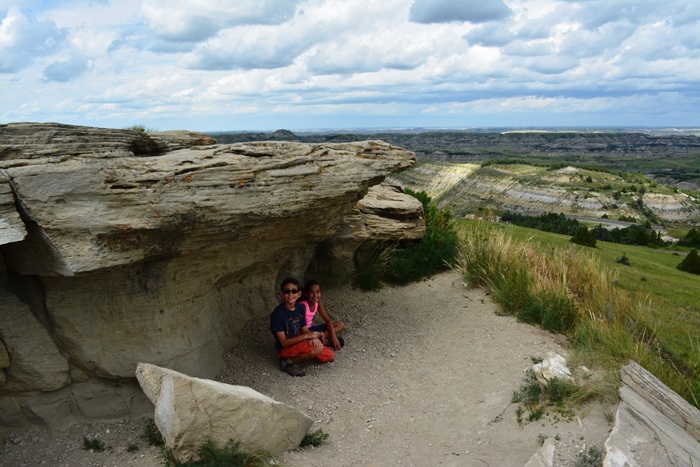 under a Hoo doos

Then we stopped at the Buck Hill Overlook for the kids to scramble around on the rocks.  We drove the remainder of the loop and saw numerous groups of wild feral horses, bison and prairie dogs.  In one location, we were almost able to get all three animals into one photo!  We headed back to the visitor center and they were just starting a ranger led tour of the Maltese Cross Cabin, Roosevelt’s first home upon arriving in North Dakota, so we took the tour.  The ranger programs are always great and we love them- just don’t get to do many due to schedule.  We headed out back to the RV.  The Medora Campground did 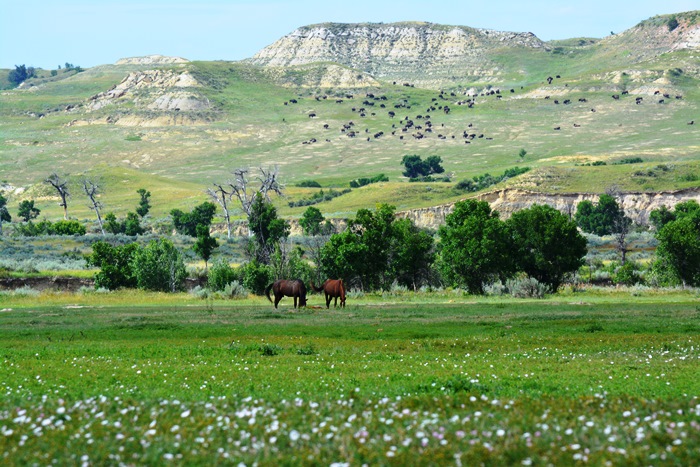 awesome to see both wild horses and bison in the same scene.

not have a pool but the City of Medora did and we played in the pool for a while.  We had spotted a taffy shop earlier that day (closed at 7:30), so we hurried out and watched them make the taffy and got an assortment of different taffy.  Most of the town seems to shut down by 7:30- likely since they do this show called the Medrora Musical every night all summer.  (everywhere we went they were trying to sell us tickets to that crazy show-  either that show is great or they are all getting a cut of the profit!)  We asked the candy store owners what they recommended for dinner and they suggested a place called The Little Missouri.  We headed over and it looked more like a saloon than a restaurant but we were tired and hungry so just decided to stay.  We later found out that we were indeed in the saloon portion and the restaurant portion was in through a separate door!  No worries, we had a nice time and even wrote our names on a dollar bill and tacked it to the ceiling like thousands others before us.  We headed back and called it a night.  On to South Dakota tomorrow!