We headed out this morning with the intention of actually stopping and visiting the massive Crazy Horse Memorial but decided last minute to just view it from the site outside parking lot.  The sculpture of the American Indian hero on a horse was begun in 1948 and only the face is visibly finished.  We likely did not do it justice and will have to come back in the future when it is finished.  We headed on to Mount Rushmore and had a great day!  We begun the day by 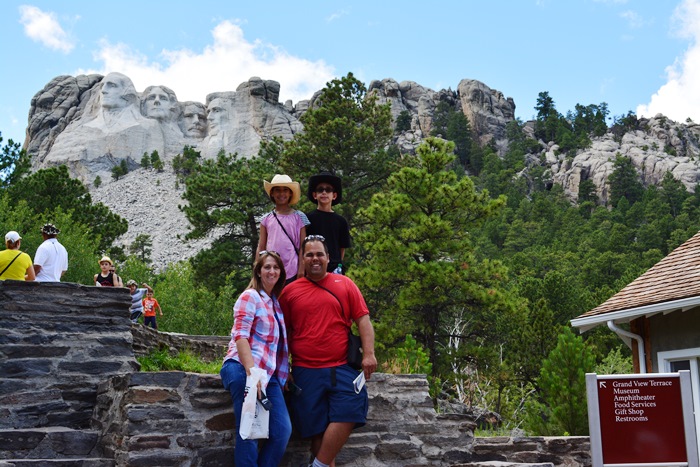 with Mount Rushmore in the background

taking the Mount Rushmore audio tour:  Living Memorial- a 28 stop walking tour that works its way around the memorial and gives you good information about the monument sculptor, Gutzon Borglum, the 4 presidents on the memorial and info on the building of the monument.  V&T really liked having their own audio device for the first half and then got bored of carrying them.  Some quick facts:  Carved in 1927-1941; 400 workers; cost was $1M; 90% done by dynamite- 10% by hand; rock is Harney Peak Granite.  It was amazing to see the size of Rushmore- Washington’s nose is 21 feet long, eyes 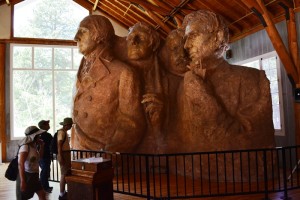 are 11 feet wide and mouth is 18 feet wide.  We had a nice lunch with a beautiful window view of the mountain and then headed back down for a walk inside the museum and watched the informational film.  We then headed off to the Wrinkled Rock Climbing Area and G & V climbed/scrambled over the rocks.  A quick stop at Horse Thief Lake just to check it out and we were on our way to our evening plan- the Palmer Gulch Chuck Wagon Dinner Show.  It was a blast!  We took a short covered wagon ride from 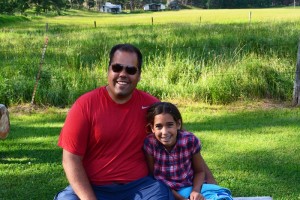 the back of a KOA camground to a large meadow.  There they had set up a chuck wagon dinner with real cowboys!  We enjoyed the singing cowboy Paul Larson and the others who provided the comic relief.  It was cool to watch them cook dinner in the Dutch Ovens over an open fire- steak, cowboy beans, potatoes and strawberry dessert.  The kids enjoyed petting the horses after dinner.  After the show was over they loaded us back in and we headed back.  This KOA was closer to an amusement park than a campground!  It has multiple pools, hot tubs, water slides, water fountains, putt-putt, huge  jump trampolines, basketball courts, sand volleyball, etc.  We let the kids play a while so they wouldn’t have “campground envy”.  We took the longer loop home and got to see part of the Custer State Park-  L had seen several small tunnels on the map that were big enough for cars but much to small for our camper and wanted to explore them.  They were pretty amazing- you can see right through the tunnels and see Mount Rushmore- very neat.  They were only one lane wide and pretty short.  It was almost dark and as we made our way through Custer State Park- we saw several mule deer and one of them came close to becoming a hood ornament. :)  We got back and called it a night. 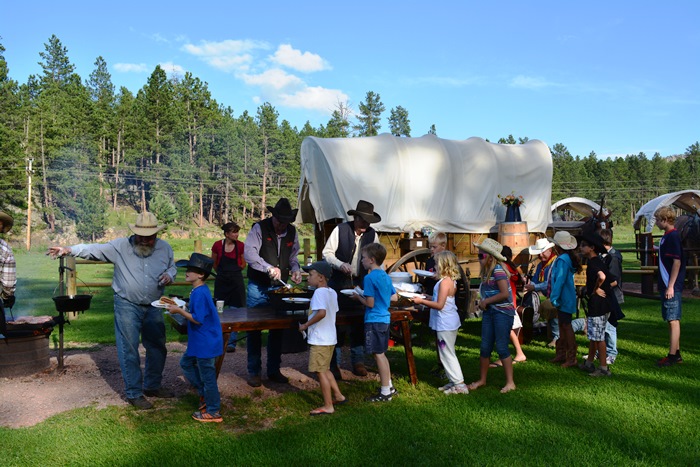 The cowboys served the food.