Rocks, caves, and Rodeos… O my! 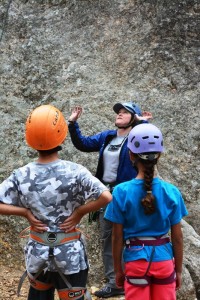 We started off early today.  We had to make the drive to Custer State Park near the Sylvan Lake area for rock climbing school for V & T that started at 8 am.  We had enrolled them in a half day introductory climbing class with Sylvan Rocks Climbing School since they have enjoyed climbing (scampering really) over rocks and boulders so much the last 3 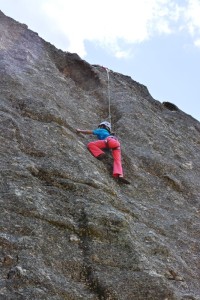 Victoria on The Cave Route.

weeks.  After the instructors got them both fitted with climbing shoes and harnesses, we made the short 10 minute hike into the area where they do the lessons.  They would be climbing practice rock cliffs ranging from 35 feet to 80 feet high.  The instructor’s name was Lindsay and she was great.  The kids loved it and they both learned a lot. They each made it up numerous  near vertical routes and really got a feel for how hard physically real rock climbing is.  L and I stood at the bottom of several of the routes they climbed up and were amazed since there seemed to be almost no footholds or handholds.  They particularly enjoyed the rappelling down after the climbs!   We wrapped it up just after 12 and grabbed lunch at a DQ on our way to our next stop-  Wind Cave National Park (WCNP).  The park (above ground) was nice but we were in a hurry (or so the kind Park Ranger told me) as we made our way to the visitor center. 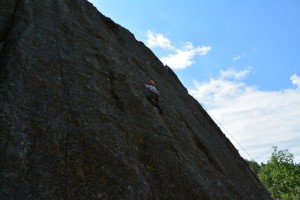 We missed the cutoff for the 2 pm tour, so we grabbed a quick nap in the car after getting tickets for the 3 pm tour.  We took the Natural Entrance tour, which is their most popular tour at almost 1.5 hours.  WCNP is known for having a formation known as Boxwork- it actually has 90% of the known cave boxwork in the world.  While it is unique, it is not as pretty as stalagmite/stalactite formations and other cave features. 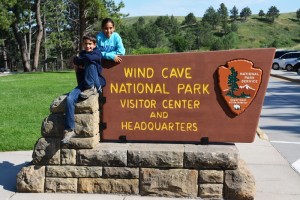 Probably unfair to Wind Cave, but since we had been to Mammoth Cave 3 weeks prior there was really no comparison- Mammoth had enormous cave rooms and beautiful formations.  We were not able to drive much of WCNP but had heard that it had an abundant amount of 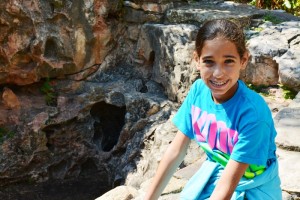 The Natural entrance…we were thankful they have added a larger entrance around the corner :)

wildlife. We left Wind Cave and started the 1.5+ trip North to Deadwood, SD for the “Days of ’76” rodeo!  Deadwood is the town where “Wild Bill Hickok was shot while playing poker.  The town was huge and had a very developed tourism base.  We were all excited as neither of the kids had been to a rodeo and neither L or I had been to one since we were kids.  We got there about 6:30 with enough time to see the sites and eat a healthy dinner of hot dogs, brats, cheese fries, nachos, and fresh fried donuts- yummy!  It started right at 7 pm and it was a blast!  This rodeo has been named the best mid size rodeo for the last 13 years or so.  It had six events and finished strong with bull riding.  The kids even got to wear their cowboy hats and V got to wear a cowgirl shirt and her boots!  The announcers and in ring entertainment were very funny. They spared no Obama jokes.  My favorite was…”Last time we were here, Clinton was in office and Johnny Cash and Bob Hope were around.  Now we’ve got Obama, no cash and no hope!” J It was neat to see all of the “real deal” ranchers, cowboys and farmers there from South Dakota- this was no big city rodeo!  We made the trip back and arrived home after 11 pm- we were all dead tired! 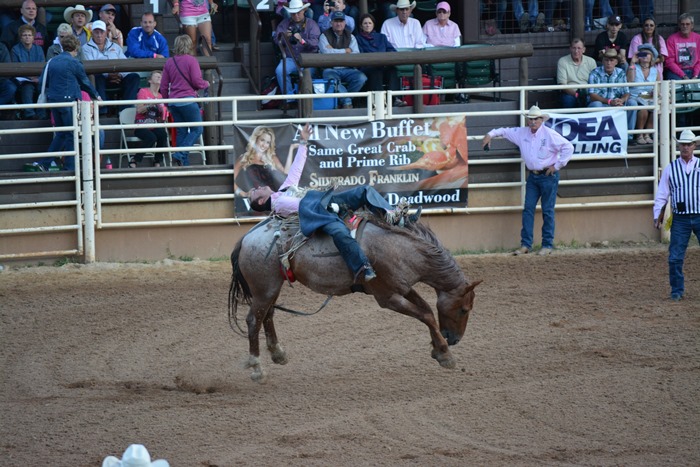