There I was at 6:45 am alone and cold near I-90 waiting for tickets! The previous day I had heard about 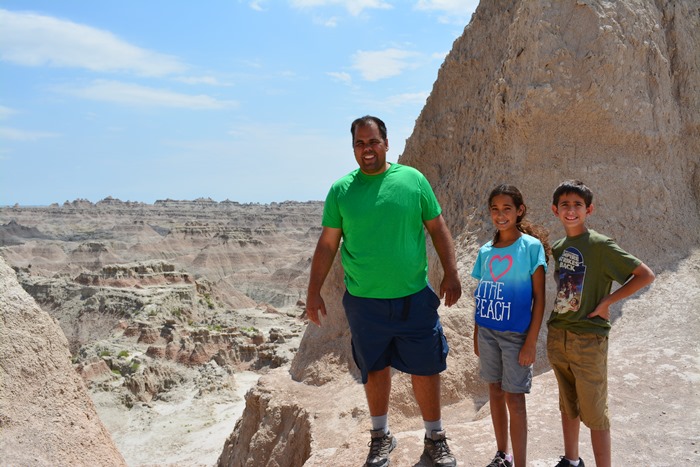 our last morning at The Badlands NP

a place up the road called the Minuteman Missile National Historic Site.  It was the only site nationwide that told the story about the Minuteman (nuclear) Missiles that begun in the Cold War era.  Also, the only place nationwide where civilians can take a tour of a (decommissioned) launch control facility!  Unfortunately, only 6 people can take the tour at a time and they run out of tickets quick each day.  The Nat Park Service manager told me that the line on Saturday had 42 people in it at 8 am at the opening and I needed to get there early Sunday if I wanted any chance of tickets for the morning time.  So I dutifully rose at 6:20 (while everyone else slept neatly tucked in their beds) and made the quick drive arriving at 6:45 sharp.  Not a person in site.  I felt kind of silly taking out my camp chair, my bottled water, my leftover Wall Drug donut (yummy) and a book and plopping myself down in front of the doors.  One would have thought I was camping out for Jimmy Buffet tickets or at a Chick-Fil-A store opening!  I had the last laugh though as more than 30 people showed up over the next 75 minutes and I had first pick of the tickets- aah the golden tickets that Charlie (Choc Factory) Bucket himself would have been envious of.  :)  I made my way back to the campground and awoke the family and we packed up and parked the camper off to the side of the motel and drove the car up to the launch facility for our 10:30 tour.  L was skeptical but we all had a great time during the 45 minute tour.  Would require much detail to go over all details but I will say that it was very neat to see the facility and ride down the 30 foot elevator to the concrete encased launch room- to think that they had the power with the switch of keys to send 10 nuclear warheads off to Russia!  And there were 1500 total nuclear warheads active until 1992 with the easing of Cold War tensions!  I like the quote they use, “Minuteman Missiles held the power to destroy civilization, but this destructive force also acted as a nuclear deterrent which maintained peace and prevented war.”  With both the US and Russia having the nukes neither ever used them knowing there would be retaliation. 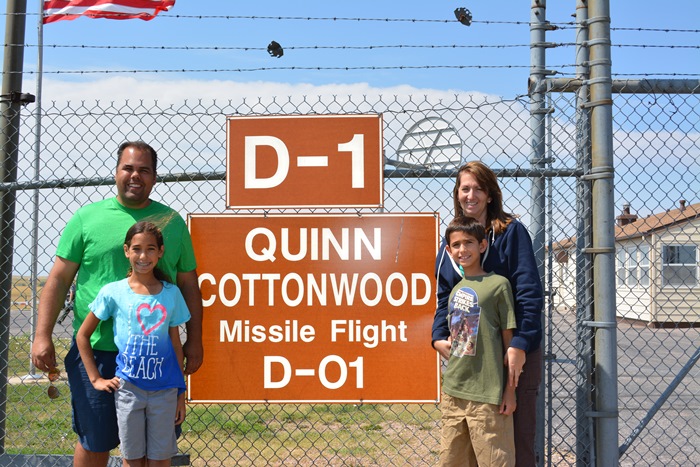 At the Minuteman Missile facility

We headed back and both L and the kids had spotted something they wanted to do (so much for getting on road early).  L had spotted the Prairie Homestead Historic Site and she wanted to go to that and the kids had seen a place where you can feed the prairie dogs.  So- we did both- We dropped off L for a quick 25 minute tour so she could fulfill her “Little House” aspirations and I took the kids to the “Pay for Peanuts for Prairie Dogs Place”- say it 5 times fast.  They sold us bags of unsalted peanuts for 50 cents to feed to the prairie dogs and the kids had fun doing it.  Those poor animals all were obese and wouldn’t even look at peanuts that hadn’t been shelled by you.  One came out to V and laid there splayed out like a piece of road kill while V rubbed his head with a small branch- no touching the animals said dad.  They finally found a hungry one who was biting on their paper bags trying to get the nuts.  We headed back and picked up L- thankfully she had not changed into late 1800’s attire while taking her tour- (Yes, this is actually an option  where they loan you the clothes).  We headed back and got the camper but did not hook up the tow car since we were getting diesel right up the road.  The gas station was dinky so i skipped it and cruised on for 15 miles waiting to find a good spot to connect the car.  Finally, I found a spot that looked okay.  unfortunately you never really know just how good or bad it is until you are right up on it.  well, this one was pretty bad after all.  I had to drive over an animal grate that was raised about 5 inches; even worse, there was a big rut in the dirt right in front of it so everything jolted and shook the camper.  L teased me about taking the rv off-roading until she walked in and found all her bake ware and dishes all over the floor.  Thankfully the kids were in the car with her.  After getting hooked up, we were off down Hwy 44-  Our GPS was acting up (or so we thought) and it hit us about 40 minutes later that the GPS was correct and we had taken Hwy 44 West not East.  By this point, we were just better off to continue along our misguided route which unfortunately took us back toward the Black Hills and Custer where we had just been the day before.  I did say that I would like to go back to that area, I just didn’t mean so soon.   What was to be a 200 mile easy day turned into 350+ mile day!  We rolled into Lake McConaughy, Nebraska at 8 pm to sub 60 degree temperatures and steady rain. It ended up being a much more intense day than we all expected and I am going to bed before a hailstorm or locusts show up! :)