I started out with very good intentions of writing at least a little something at the end of every day, if for no other reason than I knew our parents back  home would be wanting to know all was going well.  That hasn’t worked out so well as you can see. So I will try to catch you all up quickly now.

We arrived in Mammoth with enough time to get the camper parked and set up, which was unusually easy this time since we had no hookups, water or electricity.  It was just a matter of park, jacks down, slides out and done.  The goal was definitely to be very minimal since we would be there for less then 20 hours.  We headed straight over to the visitors center less than 1/4 mile away for Mammoth Cave Campground, and were able to get on the last “New Entrance Tour” of the day which was what we were hoping to do.  The tour was great.  A lot of stairs and slippery platforms, but it really was pretty amazing.  I think I would have been more hesitant to take a trip like this if the kids weren’t old enough to understand our global flood/young earth view of Creationism; I am so grateful for the fabulous resources from Answers in Genesis.  The thought of these caves being formed and shaped by the water’s of Noah’s flood made it even more powerful and amazing.  After our tour and a few minutes in the gift shop, we decided to grab dinner in the restaurant.

With some good hours of sleep last night, we started today off well.  G had a few extra minutes to do some work before the kids got up.  For some reason we are always dong great on time until we wake the kids up and then all of a sudden we are rushing around like mad people trying not to be late.  Since check-out time at the campground was earlier than we would be finished, we packed it up and parked the camper by the visitors centers.  We were pretty proud of ourselves…mostly because we were on time for the tour and everyone was in a good mood. :)  “The Historic Tour” was good; I can’t say that it was great because we all agreed that we liked the other tour more.  It was more commercialized, but the history information was really interesting. 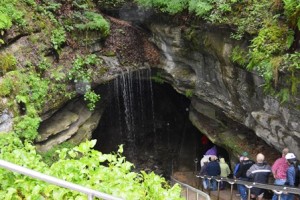 By about 12:30pm we were finished and back on the road heading toward St. Louis.  In the matter of about 5 1/2 hours, we were in 4 different states. Kentucky, Indiana, Illinois, and then into St. Louis, MO.  Tonight in St. Louis is where our lack of planning really got us.  Most of you know that G and I are both planners.  Most of our trips are planned on excel spreadsheets in great detail.  Often to the kids, but mostly, to my frustration, the times when each person needs to wake up, and even specific time to rest are usually listed. :)  Well, we just ran out of time to do that for this trip and we thought we wanted to have more flexibly.  Yes, we have general plans, but the details ( for example…the tours decided on and tickets purchased) we just didn’t have time to figure out ahead of time.  We decided on the drive in to call and purchase the tickets over the phone for the stuff we wanted to do at the Arch tonight.  We quickly realized that the evening would be much different than we had hoped.  The “Fair at St. Louis” is happening for the holiday weekend and there are a lot of people in town.  The free Bret Michaels concert right under the Arch, the crazy amount of food venders, and the ridiculous amount of people were pretty overwhelming.  With so many people around, the tram up the Arch was full for this evening and for the morning.  At this point our only hope is to get there early in the morning and wait in line for the first tram up.  We decided to find a moderately quiet place (ha ha) to wait out the concert so we could see the fireworks.  Once we got in the car and started back to the rv park after the fireworks we realized what a big mistake that was.  The combination of the baseball game ending and the concert/fireworks ending at about the same time meant TRAFFIC!  About an hour and 40 minutes to go 28 blocks back to the rv park.  Needless to say that everyone was pretty worn out when we got back tonight, especially since our bodies are still feeling like it is an hour later.  Tomorrow is a new day and with some good sleep tonight I hope everyone will be excited about getting up early to stand in line in the morning. :)

I do expect the planning to go into full force starting tomorrow.  We will have about nine hours of driving to get us halfway to Rocky Mtn Nat’l Park, our next stop.

One Response to a surprise concert