We left Grand Canyon this morning and made the short 2 hour drive to Flagstaff, Arizona down Hwy 64.  We thought we had a reservation at the Flagstaff KOA but someone (who will go unnamed) had forgotten to make it.  Not a problem!  The KOA was full but we found space at Black Barts RV Park just an exit up on I-40 and right in Flagstaff.  Each night they have the Black Bart’s Steakhouse, Saloon, and Musical Revue. 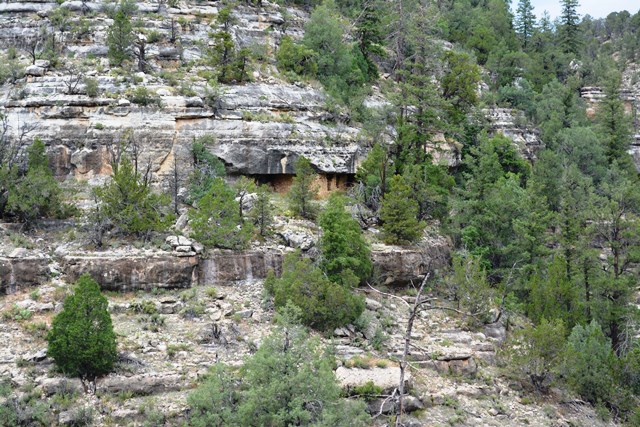 It sounded good and the line was out the door that evening but we decided against another big meal tonight.  After getting set up at the campground and a quick Walmart run, we were out the camper door just after lunch to explore the area.  Our first stop was Walnut Canyon National Monument.  It was our first experience with cliff dwellings and we were very impressed.  The area had Sinagua (meaning “without water” in Spanish) Indians as the inhabitants from around 1125 to about 1250 AD.

They used the cliffs to build homes/storage rooms/villages right into the mountains.  After a quick visit to the visitor center, we went right to the Island Trail, an approximate one mile loop trail that encircles the canyon island.  The trail takes you past 25 cliff dwellings and you can walk right inside most of them!  The 1 mile trek however is not easy though and required us to climb down (and then up again) 240 rock hewn steps.  We must be getting more accustomed to the walking since neither of the kids or Lindsay or I did much complaining about the steps.  The views of the dwellings were well worth the steps!  They also have a short rim trail but we decided to bypass this one. 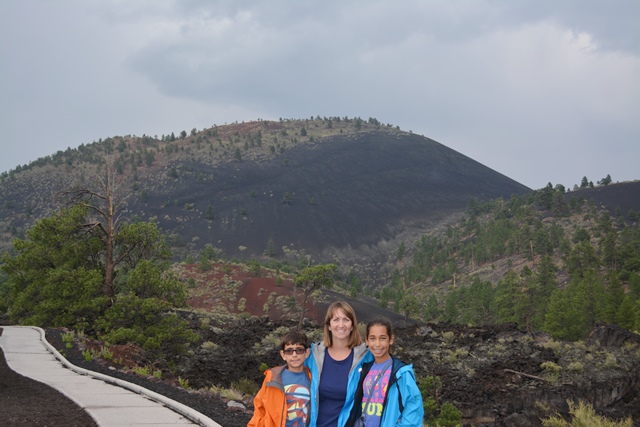 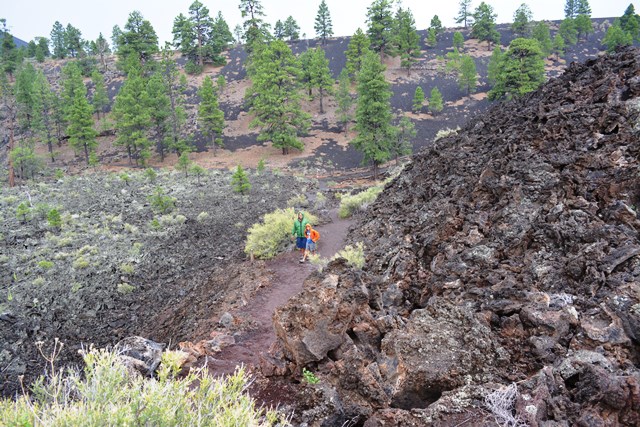 Winding around the lava flow

We then headed north a short distance and got to our next destination, Sunset Crater Volcano National Monument.  Sunset Crater Volcano is thought to be the youngest volcano in the Colorado Plateau erupting somewhere between 1050 and 1125 AD.  No surprise that this was right before the dates of the Walnut Canyon cliff dwellings as it is thought the people moved to the Walnut Canyon area after the eruption.  The 1000 ft high and 2500 ft wide volcano cone is better visible from the air or from a distance and they no longer allow guests to climb the crater cone in the last 40 years.  They do have an easy 1 mile trail called the Lava Flow Trail that skirts the base of the crater which we set out to do. It winds through portions of the Bonita Lava Flow which covers a total of 2 sq. miles.  Immediately upon stepping out of the car, we heard the thunder and a light rain started.  We grabbed our rain jackets and proceeded to have the trail all to ourselves for the next 30 minutes!  It was an otherworldly experience! The black lava fields were mostly barren.  We heard it described as a “ruined beauty”- which I thought was an excellent description.  Even now over 900 years after the eruption, the mountain has plant and tree growth on one side only.  Lindsay and I both enjoyed the uniqueness of the landscape and I think Victoria and Thomas both enjoyed getting to take a hike in the summer rain.  We made our way back to the camper and had a nice relaxing evening as we get ready to further explore the Flagstaff area tomorrow. 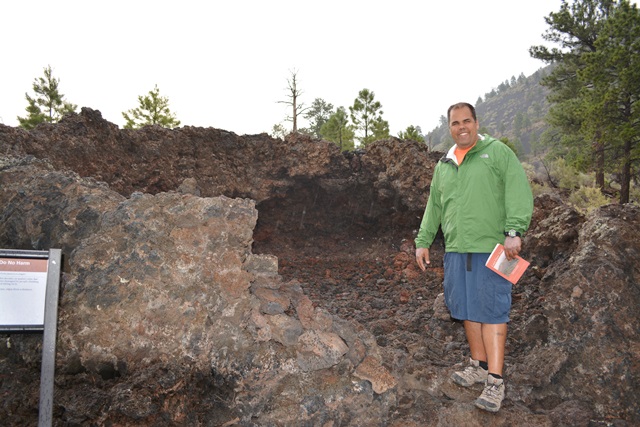 One of many spatter cones in the Bonita Lava Flow.