Freeport, Maine just after 9am. We had come to Freeport for one thing- to visit the original L.L. Bean store! It was set over a city block and encompassed several sub stores including main, home, hunting/fishing, watersports and discount. The large Bean boot truck at the front was a cool sight and our first family photo for the trip. We broke into groups inside with Thomas/Greg heading to the hunting/fishing section and Lindsay/Victoria headed to the ladies clothing areas. Thomas and I checked out the multitude of guns on the showroom floor, fishing rods, and

He has been waiting a long time for this lobst-ah :)

taxidermy displays while the girls bought some clothing due to the cold front that had rolled into coastal Maine. We left Freeport and headed toward Route 1 to explore the coast. We rolled through the towns of Brunswick, Wiscasset, Waldoboro, Thomaston, before

stopping the camper in Rockland, Maine along the Penobscot Bay and unhooking the Explorer. I had been 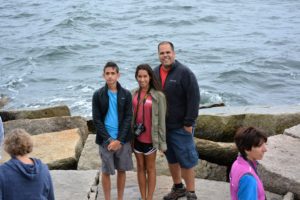 At the edge of the breakwater.

looking forward to a Maine lobster dinner over the last two days of driving, so we stopped at Claws Restaurant for a cooked whole lobster, lobster mac-n-cheese, overstuffed lobster rolls and a hamburger for Lindsay (the non-seafood eater in our family). The food was excellent and we had a bay view from our picnic table. We headed to the Rockland Breakwater and Lighthouse for our next stop. Construction was started in 1882 and took 18 years to complete the .8 mile breakwater that reaches into Rockland Harbor. Nearly 700,000 tons of granite were used to build the breakwater which is shaped like a trapezoid, 45 feet wide at the top and 175 feet at the base, built in 9 sections. We started our trek and timed it beautifully as we caught the end of a sailing schooner race. After completing the 1.6 mile walk, we drove back and reconnected with the camper and continued north along Route 1 passing the towns of Rockport and Belfast before reaching our home for the next three days, Hadley’s Point Campground on Mt Desert Island. We rolled in, set up and Thomas, Victoria and I threw the football and Frisbee around until dark. A great day exploring coastal Maine! 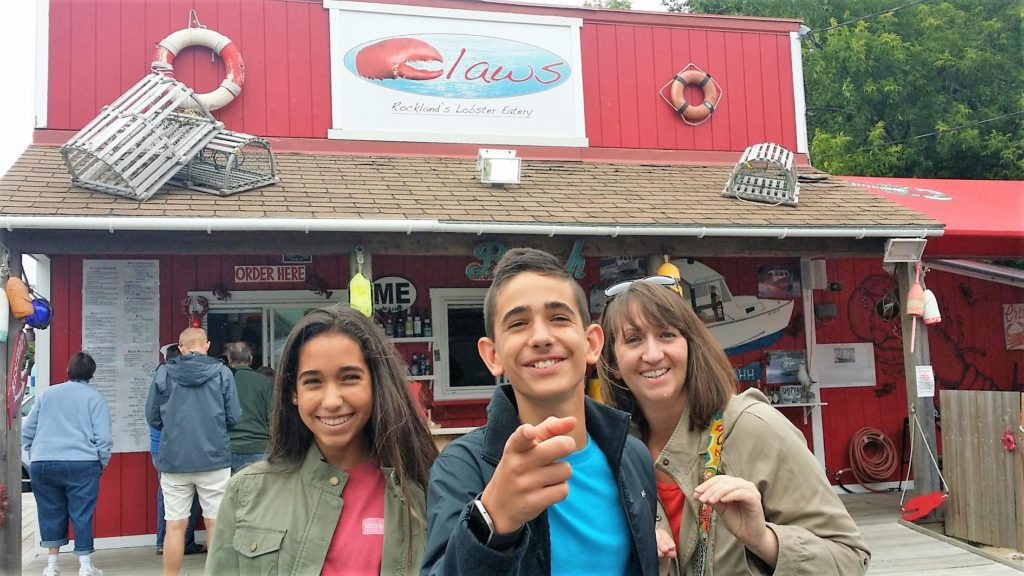 Waiting for the “claws.”