G Again.  We left Steamboat Springs early and drove for almost 3 hours crossing over from Colorado into Utah.  A beautiful drive with gradual slopes made for nice driving after yesterdays hair raising driving adventure out of RMNP.  Around 11am we pulled into Dinosaur NM for a quick visit.  You park and can 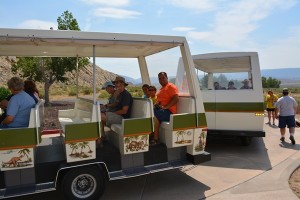 see the small visitor center and gift shop but the “Disney World” style tram that runs every 15 minutes from the visitor center to the Quarry Exhibit Hall is the real attraction! :) jk  The Quarry exhibit hall is a beautiful two story glass building built directly onto the dinosaur quarry mountain.  Upon entering on the second floor, you get to enjoy seeing and touching actual dinosaur bones in air conditioned comfort (score one for the federal government!).  It really was a site to behold how all of the bones were jumbled up together in the mountain.  It was a good time for us to have a quick discussion with the kids about the Flood and Creation versus evolution.  I have been tempted to test one of the park rangers and see what they say if I tell them we are Christians and don’t believe the bones there are 149 million years old- thus far I havn’t- but the trip is young!  We were loaded back in the RV and were on our way by 12:30!  Nothing like the efficiency of a 1.5 hour stop to make you feel like you’re accomplishing stuff at warp speed!  A nice 1.5 hour trip and we were pulling into Flaming Gorge Resort (AKA Flaming Gorge Trailer Park!)- we are sandwiched between two 1970’s vintage single wides.  We set up the camper in record time and did the quick drive down to the Flaming Gorge 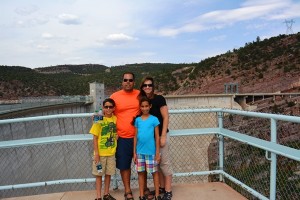 Dam visitor center.  They had a free 1 hour tour at 3pm and we were the only ones on it!  I told the kids I paid extra for the private tour!  Wow is all I can say about the dam tour.  That dam tour was the best I have ever been on- the first, but also the best!  They take you on a walkway over the dam where you can see 502′ to the river below.  A quick ride in the elevator to the bottom and you can see up to the top.  We did a brief tour of the generating room and then went outside.  We fed the fish at the bottom (different varieties of trout).  Very glad we made the time to take that dam tour.  We left the dam and continued on towards Mustang Ridge/Sunny Cove so everyone could get there feet in the cold water.  There were no shortage of crazy Utahians who were swimming in the mid 60 degree water. Too cold for me, but V was sore that we did not let her get fully in.  We drove back across the dam and went to the Red Canyon Visitor Center area.  We had a nice dinner at the Red Canyon Lodge restaurant  and then traveled down to the visitor center.  It had closed but the cliffs and views were still wide open for viewing. Beautiful views across the 3000’+ wide  canyon that is over 1600′ deep!  L (hereby named Nervous Nellie) was terrified that the kids were going to climb over the fence and plunge to the canyon 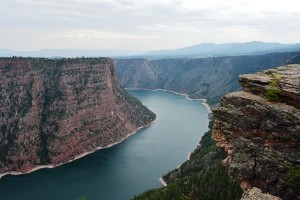 below.  The beautiful Red canyon walls were a site!  The gorge was named by Major John Powell in 1869 after he saw the sun reflecting off of the red rocks- hence Flaming Gorge.  Great day and back in for an early night sleep. Off to Grand Tetons tomorrow!