Probably one of our best days yet!  We awoke a little after 8 am and had a good breakfast before heading out just after 9 am from the campground at Colter Bay.  The day started out rather ominous by just starting a light sprinkle as we were pulling out. We started our day heading south down the Teton Park Road- it was a beautiful ride even if the cloud cover had settled in on the Teton range making views less than their best.  Funny how when you have a certain amount

On the Hidden Falls Trail

of time in a place, the weather has to be mitigated so you can stay on track for your plan.  Wildlife sighting were also minimal since most animals were trying to stay out of the weather.  A portion of the road was one way and had some nice views of Leigh and String Lake.  We arrived at our first destination of the day, the South end of Jenny Lake.  By this time, the sprinkle had turned into a steady rain and the temperature had dropped to low 50’s- no matter- we put on our coats and rain jackets and headed out for a short 300 yard walk to the Jenny Lake dock. They have two options, you can walk around the lake on the south side (about 2.5 miles one way) or take a paid ferry to the other side. We took the ferry shuttle boat and arrived on the west side of Jenny Lake in just a few minutes.  We made the mostly uphill .6 mile hike to the beautiful Hidden Falls- it seems we all can hike better when there is a waterfall as the destination.  I was excited because this was the first occasion I had to put on my bear spray belt holster and have my new bear spray at the ready!  Halfway through the hike the rain suddenly stopped and everyone seemed to get in a better mood. Hidden Falls is a fantastic cascading waterfall with a large volume of water coming through due to melting snow from Mount St John.  We snapped some great pictures and met a large extended family from NY/NJ who had flown in the night before and were all wearing the same t-shirts-  the kind you see those families wearing in Walt Dis World to identify themselves. I jokingly mocked the fathers and they promptly blamed the females in their group for making them wear them.  We did see a number of brave souls who were climbing up or rappelling down the mountain in the distance.  We considered making the short additional hike to Inspiration Point (about .4 miles one way) but decided against it since it was very uphill- about 400 feet of elevation gain over the .4 mile-  lets just say we were not that inspired!  We came back down the mountain 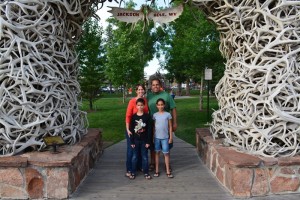 and took the ferry back across.  We loaded into the car and headed off for Jackson Hole for a quick lunch before our afternoon adventure.  We had booked a 2:30 whitewater trip down the Snake River with Sands Whitewater Company the previous night.  There are two kind of river trips in this area- Scenic (or Float) trips which are primarily done on the calmer portions of the Snake River directly inside the GTNP with wildlife viewing and relaxation as the main goals and the more adventurous Whitewater trips which are held south of Jackson Hole along an 8 mile stretch with some Class III rapids.  We chose a middle ground- the whitewater trip but in the larger 14 man classic boat which would be more stable for NN (L).  We got to Sands Whitewater and they said no one else had signed up for the 14 man raft trip at that time but they would upgrade us to the smaller 8 man boat.  We did and that is when L nerves really started to get frayed.  I could see it in her face as we made the 20 minute bus ride that she was getting more nervous by the second.  Once at the river put in point, the guide asked for two people to be the lead paddlers in the front of the boat- almost instantaneously both T and I shot our hands up- like father like son!  The first mile or so was rather tame but then the rapids started to heat up.  The first time that 51 degree water came over the bow and hit T&L it was something!  We had a blast over the next almost two hours navigating different rapids until we got to the towards the final Class III rapids called Big Kahuna and Lunch Counter.  Big Kahuna rapids creates an actual surfable wave and there were surfers lined up to surf it- very cool!  As we approached the biggest rapid, Lunch Counter, the other Sands company 8 person raft in front of us went in sideways and 6 of the 8 passengers and the river guide were all thrown into the river!  By this time, both T&V had a firm grip on to me and L had the most terrified look on her face that I have ever seen (later proven by photographic documentation!)  We made it through with no problem and all was well. Later that evening while looking at the rafting pictures, we saw one of our raft where only G at the front of the boat and the guide at the back of the boat were visible- the boat had basically curved into a exaggerated U shape as we went through the rapid!  What a great day-  ironically the last time I had went rafting was in 1991 and I had torn my ACL horsing around, the last time L went, she had been thrown out.  V is already asking when we can go again!  We made the bus ride back, changed into some dry clothes and set off to explore 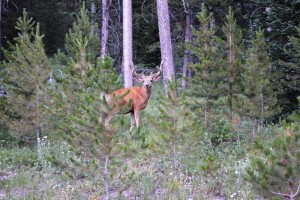 downtown Jackson Hole.  Beautiful town and we enjoyed walking around with the other zillion tourists. :)  We had spotted a Chinese buffet up the road and decided to give it a try.  I walked in and the place was packed with Asian people- I thought this must be a good sign.  We later found out that they were all there because their tour bus had dropped off all 50 of them.  L gave me a hard time for our coming to this restaurant instead of something appropriate to the area, but I could not hear her since I was stuffing my face with egg rolls and and sweet and sour chicken.  We made a quick getaway, grabbed some ice cream and took the Teton Park Road home for the camper.  Not much new wildlife but we did see two large mule deer within about 15 feet of the car.  We saw the same bear at the same spot but no new bear sightings. Tomorrow we are on to Yellowstone!